Today's post by Lene of The Seated View confronts the comparisons people are making between Hitler and Obama. Reading her post, I am reminded of an email my tea-party giving attorney "friend" sent me, using a photograph of Gates navigating some steps with his cane while holding onto the arm of another person; Obama is a step ahead and looking forward. I ignored the email at the time, though I realize I missed an opportunity to educate (her) and to share this with others. Conservatives have certainly never as individuals or as a collective advocated for our rights and needs. Here's the email:

July 31, 2009
Obama's revealing body language (updated and expanded))
Thomas Lifson
This picture truly is worth at least a thousand words. 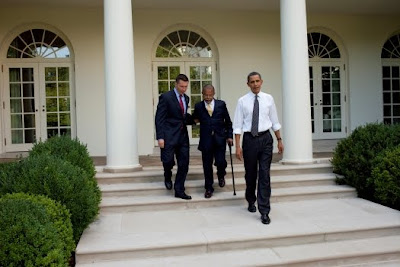 I am stunned that the official White House Blog published this picture and that it is in the public domain. The body language is most revealing.

Sergeant Crowley, the sole class act in this trio, helps the handicapped Professor Gates down the stairs, while Barack Obama, heedless of the infirmities of his friend and fellow victim of self-defined racial profiling, strides ahead on his own. So who is compassionate? And who is so self-involved and arrogant that he is oblivious?

In my own dealings with the wealthy and powerful, I have always found that the way to quickly capture the moral essence of a person is to watch how they treat those who are less powerful. Do they understand that the others are also human beings with feelings? Especially when they think nobody is looking.

As some AT commentators point out, this picture becomes a metaphor for ObamaCare. The elderly are left in the back, with only the kindness of the Crowleys of the world, the stand up guys, to depend on. The government has other priorities.

One of the major subtexts of the health care debate involves the public's fear of indifferent, powerful bureaucrats ruling their lives. It is one thing to wait in line at the DMV to find out which other line you should wait in, in order to begin the process of waiting for multiple bureaucrats to go through the motions of processing your request. I have spent entire afternoons going through this process.

But when we get to health care, waiting often means enduring pain and dysfunction longer than necessary, sometimes a worsening of the condition, and sometimes death.

That's why I think this image will have genuine resonance. It captures something that older Americans in particular can relate to. The President presses ahead with a program that will tell them to take painkillers instead of getting that artificial hip.

At every stage of the entire Gates affair, Obama has provided a revealing tell. The "acted stupidly" blunder revealed that he automatically blames the police and thinks they really are stupid to begin with. It didn't trigger a single alarm bell in his mind as he figured out what to say.

Then, the non-apology apology revealed an arrogant man who
cannot do what honest people do: admit it when they make a mistake.

Now at stage three, the beer photo op looked OK. It didn't turn into a disaster.

But then in a small moment that nobody in the White House had the brains to understand, Obama goes and send a body language message like this. I think he is going to get deeper and deeper into trouble. He is no longer repeating the familiar scripts dreamed up for the campaign. He was a master performer.

But when he goes improv, as a president must do, he lets his true character show. This helps widen the level of doubt that Obama is the same guy a majority voted for. Those doubts can only grow.

Andrew McCarthy has assembled an overwhelming case that Obama has lied about who he is. I predict that more and more Americans will become open to the argument that they have been had by a sophisticated and ruthless effort to foist a phony on America. Page Printed from: http://www.americanthinker.com/blog/2009/07/obamas_revealing_body_language.html
at July 31, 2009 - 04:59:44 PM EDT

I have never known a conservative who is not a relative or a very close friend to offer me assistance in the ways this email suggests, not that we know if Gates needs or wants help beyond what he is getting; in fact, I've had some conservatives abandon me mid-field trip and leave me in a dangerous situation. Most conservatives never offer me help where I very obviously need it (such as waiting for a door or not being able to reach overhead; someone also let a glass door slam on me in my scooter last weekend rather than continue to hold it), or even in their own homes. The woman who sent me this email certainly has never done anything to allow me accessibility in her home or more comfort within it, and in fact chooses to make fun of those who do request accommodations (see the tea party post). Conservatives do not care about accessibility either privately or publicly, whether I can attend events or must stay home. They do not care about my health or how I am doing. I have been told by this person that she always changes the subject (which I've noticed) when it's about "health" (read "disability"). This common kind of attitude is dismissive of others' experiences and the important social and legislative aspects of disability that apply to a lot of people. No wonder people don't understand why my friend who's been through chemo for cancer just after surviving a near-fatal heart infection can't make it to events or help as much and don't understand the day after she's had chemo why she's sick. No wonder this woman can make such conclusions about other people and about universal health care, also deciding, in her words, that I feel sorry for myself. The irony here is that she obviously expects people to feel sorry for Gates.

My husband and daughter both said "no" and looked shocked when I asked them if I ever felt sorry for myself. People who have not known me from childhood don't realize that none of this is new for me; I found myself having to comfort other people about wheelchair/scooter use, which was really strange since it didn't bother me. I do get tired of being repeatedly cursed at in public (especially in front of the kids), lack of access in buildings, refusal to provide service, etc., but observing and commenting on these things is not self-victimization--these issues affect all disabled people and should change. These things are what make disability difficult, not the actual health issues. When one person asked, "why you?", I've responded, "why not me?" While I'd gladly accept better health, I am not going to waste energies on wishing for the impossible that can be put to better use.
Posted by FridaWrites at 8:56 AM

I stopped reading about halfway through that inane email. Good lord, they really do grasp at straws, don't they? Bethcha if Obama had been helping Gates, they'd circulate the picture babbling about Obama's cynical use of an old, crippled (because they would use that word) man to further his evil healthcare agenda.

Frida, you speak truth. I'm getting mighty tired of concern-trolling from cold-hearted bastards who wouldn't move their mother's corpse unless it was blocking the way to the beer.

Thank you, yanub--now that's a sentence to remember!

Oops, Lene, I missed your comment. Yes, I think the man can't win no matter what he does. The responses to his educational speech show that.

That e-mail was disgusting, to say the least.