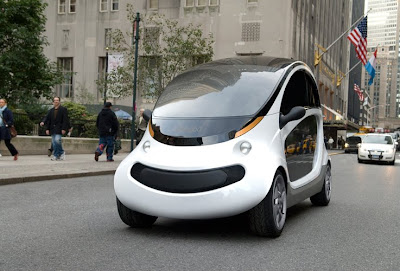 Last night I dreamed I went to Manderley again. No, seriously, last night I dreamed I drove one of these cars. (Visual description: small white bubble mobile, rather futuristic, on an urban street. The door panels are see-through and the rounded windshield is proportionally large.)

Now, while you are busy laughing at the car, let me say that my husband woke up saying, "Noooooo!" (not really). Of course my real nightmare was that he took the Cub Scouts (including mine) rock climbing up a tall cliff. They're too young for that.
For those of you who have always fantasized about owning a Mr. Bean car and parking in impossibly tight spaces, this vehicle is called the Peapod and uses no fuel and produces no emissions. Surprisingly, it holds four people. It has a maximum distance of 30 miles and goes 25 mph. Around here, that means you will be Mowed Down by an SUV roughly 40x that size. I've already learned that people like to run down Saturns and other sedans for no reason other than that they're there, and since people with spine problems are prohibited from playing bumper cars, I no longer partake.
I do have to say I miss driving the green CR-V, which had great mileage and handled mountain roads like a gem. The minivan embarrasses me. It's huge and seems excessively consumerist. Ah, humility. Honestly, I parked our minivan next to a fortwo (link to another bubble mobile, this one allowing for greater distance) once, and the juxtaposition was almost comical. It won't hold three or four people, though, or else it would be called a forthree or a forfour (not a bad name). So it wouldn't work for trekking short distances with kids.
Peapod does have an SUV version, SUV apparently being a relative term, but I doubt it would hold anything other than a manual chair. And I doubt I could get in and out of a Peapod easily because of my back. It would be nice to have something so small and fuel efficient for short trips, but really it's for urban areas. We lived 40 minutes from "civilization" for a short while.
Posted by FridaWrites at 6:47 AM

Another small car lover! I love being able to park, and to have smaller fuel and maintenance costs. I love having a possibility of sometimes being able to wash the darn thing all by myself. There's nothing about them that I don't like. If only it was easier to rent a vehicle or hire someone to carry large loads the few times I really need something big moved here to there, there's be no problems with having a small car at all.

The boyfriend of a relative has a cool green mini-Cooper that I really like. My husband's considered a Honda Fit or similar vehicles for quick trekking.

I switched to small SUVs so I could get my kids in and out when my son was a very small yet very fat and heavy little chunk. I do miss smaller cars--they handle so well.

I've got a car that exists only in my mind. I think of it when I'm walking in the rain. Great fuel efficiency. As for small cars that take powered chairs, check out the Kenguru! The aussies have the Freewheeler Caddy Life too. Perhaps not available to you now, but good things are coming. I want to get a Kenguru for a friend, and we're working out the details.

I particularly like the Freewheeler--holds both the family and the scooter in a reasonable size, plus room on the roof for a rack for camping equipment or luggage.

Wheelie Catholic has posted about accessible Honda Elements before--there are some neat conversions that have been done with those.

I am hopeful more options will open up over time.