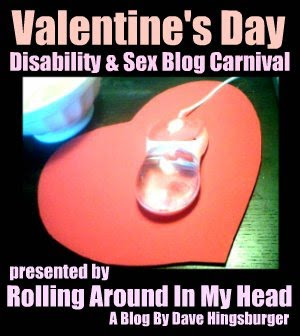 Valentine's Day Sex and Disability Event hosted at Dave Hingsburger's blog. Feel free to join in the discussion, write a post, or share a link.


Last year I wrote that not only do people with disabilities have sex--a material fact that continues to surprise nondisabled people--but we can do so creatively and with joy. If you haven't read that post, you may want to read it first. What I write about this year is a bit more sobering and not sexy per se but as important.

We disability activists see disability rights as civil rights, as close kin to protesting segregation and sex discrimination. Rosa Parks protested being sent to the back of the bus; disability activists such as Ed Roberts protested being unable to get on the bus or to the bus. When a group of people is exploited, objectified, seen as less, their sexual rights are as sublimated as their rights to employment, voting, and freedom from harassment and violence. We have seen this happen with black women who were raped and yet considered to be unchaste, a young black teen who was murdered for looking at a white woman, with nineteenth-century Western white women and twentieth-century African women subject to genital mutilation, with gay people who have been murdered. These are but a few examples. And when it comes to the sexual rights of disabled people, we're still in the dark.

Here's what I want: a movement from a culture of abuse and denial of our rights to sexual autonomy.

In addition, there is sexual abuse from medical professionals. If you were an abuser, what job would you work in? Perhaps one where you have access to kids who are not supervised and who are very vulnerable, or adults who are very vulnerable. I experienced "minor" sexual abuse as a child by an x-ray technician given responsibility for x-raying every bone in my body, then a similar situation as an adult when I had my first spinal MRI (the technician checked to see if I wore a bra with his hand and then left his hand on my breast, telling me to think of my "boyfriend" during the procedure). And something similar while partially sedated (by a tech or male nurse, not the physician). I can't be the only one, and I imagine worse has happened, even routinely, to some people with disabilities. I don't quite understand the dynamic, whether people who abuse within the profession abuse others as well (equal opportunity abusers) or if they only target people with disabilities or who are medically vulnerable because they see us as less than human. Even while I had to have pregnancy and STD and hepatitis testing following an act of abuse, radiology techs and nurses almost never ask me if I could be pregnant; only very recently am I not able to carry a pregnancy because of an incidental condition probably unrelated to my disability--but many other wheelchair users can experience pregnancy. Thus the medical profession acknowledges our abuse and even participates in it (see Ashley's case) without acknowledging our autonomy: that we can and do have sex is not acknowledged--routine protocols are dropped.

At the same time that PWDs experience more sexual abuse, we are often denied sexual autonomy. Not only can abuse affect people's healthy sexuality, but institutions (hospitals, rehab centers, nursing homes, "schools" for people with developmental disabilities) lack privacy and often have policies that interfere with expressions and acts of sexuality between partners or alone. Caregivers, whether family or paid, can disallow, prevent, or punish sex. People who need help positioning as others can do for themselves may have extreme abstinence forced on them, and those caught in nursing homes or institutions are labeled as sex offenders even as their closed doors are ignored. The system that denies many people less-expensive home caregivers and thus forces even young people away from their homes and into institutions denies people many other rights to basic decision making (when to eat, go to bed, and more significant decisions and preferences we take for granted). Thus if you are in a nursing home in Chicago, you may be sexually abused for years (recent news stories). But have sex on your own, not so much.

Even while people assume we "don't" and look surprised that we have children or use birth control or vibrators, others assume our bodies can be touched, pushed, assaulted, and that we just won't mind. Or they assume in more minor ways that my relationship is over and my lack of a wedding ring signifies anything other than arthritis in the ring finger that I broke, that my husband is as available as if he were single, that he is the one truly suffering most, that I am invisible, that my existence lies outside the boundaries of consent. That my inability to be present signifies something about our relationship rather than my ability to be present.

The reticence of people to acknowledge our sexuality and sexual ability means that when problems do arise, there are few answers. It means that PWDs and people without disabilities may miss out on relationships because of people's wrong assumptions. There is still very little written on sex and disability, and people with disabilities report that their doctors or counselors are not willing to answer questions or give advice, though to many of us impairments in this regard can be distressing and affect our most personal relationships. Solutions may not be found and we may be asked directly or indirectly just to live with pain or abstinence. Right now intractable pain and extremely limited mobility in my hip means that I often cannot have partner sex or solo sex in the ways that I prefer, even with variation. Is there a solution to this? Heavier pain meds that I don't otherwise need given before and after, a minor hip surgery? Surely there are some answers, and it should matter to someone that my lack of hip abduction significantly affects me in a way that others may think insignificant or nonessential.

Yes, the discrimination is really appaling. Thanks for an honest, thoughtful post.

Brilliant and sobering post. I'm too 'full' of what you've written to say more.

I have a mental disability or something and my girl friend has an ability to take me traveling and take me out to the theater and take me traveling. Maybe I have a mental ability that's on a different frequency or something. I blog about it. I made a response called "Saint Valentinus and the 13th Aeon called Sophia" and it's on my post called Poly Glamorous Resolutions.

Thanks for posting about it.